Sophie’s doing pretty well. She’s getting her head down at college, planning which university she wants to go to, is doing work experience at a vet’s surgery, has been a vegetarian for the past year, and can beat her brothers in a kind-of-fair fight. She’s got an excellent sense of comic timing and has a proper Mancunian accent. She’s sixteen and has got her life sorted.

I love Sophie to bits and pieces, she does my head in sometimes, but she’s my little sister. I try and maintain an honesty with her on the basis that if I tell her the truth, she’ll do me the same courtesy, and she knows she can talk to me about anything and I’ll be reasonable. Most of the time. Aged eleven and in McDonald’s she asked me what sex was, and I gave her “the talk”. Aged fourteen she asked me whether I smoked, I said yes but if you tell mum I swear I’ll kill you. Aged sixteen, now, she’s asking the more complex questions. Stuff about sexuality and politics, and the answers aren’t cut and dry any more. Now I try to make sure she’s well informed about stuff. So when she asked what this was that I was performing at, I said it was a feminist theatre festival, and she gave me a bit of a blank look. Right, she said.

She decides that she wants to know more about feminism. Me, I didn’t encounter the word properly until I was at uni, and it probably took the full three years before I would openly call myself a feminist, so I’m happy that she wants to do a bit of research. I want Sophie to be better armed. She’s sixteen, part of the internet generation, the social media generation, the technological generation, engages more with things online than any other medium. So she goes online.

the advocacy of women’s rights on the ground of the equality of the sexes.

Okay, she thinks, but that doesn’t explain anything.

someone who believes in the radical notion that women are people.

Women are people anyway, she thinks. She doesn’t understand why people would think differently. And this isn’t making any more sense, so she goes to default social media.

She types in “feminist”. A couple of suggested search terms appear in the drop down menu.

First suggestion – FeministFrequency. Vlogger. A woman called Anita Sarkeesian, but it seems to be mostly about video games, and Sophie isn’t into them.

She goes back to the search bar and types in “feminist” again.

Second suggestion – Feminist gets put in her place.

She clicks on the fourth one and reads the titles of the videos.

And she’s reading through the titles and even starts to watch a couple of the videos but she never gets past a minute or so into them. The people that are making them are nasty and shout and swear and are altogether pretty angry. And Sophie gets a bit angry as well. She doesn’t quite understand why, but these videos piss her off. She doesn’t get why there is so much hate in this video search, why people would be so derogatory to other human beings. And it’s not that the people who are being attacked are saying anything to get that angry about – they’re voicing opinions that she’s heard before, from her mum and her teachers and her friends. From the vloggers she follows on Youtube. From me, her older sister. And then she thinks about it, and she realises that if there are people getting vocal about it, getting this worked up and stressed out and angry, then it must be something pretty damn important.

She types in the hashtag “feminism”, and she’s expecting the worst. One of the first images that comes up is a screencap of a TV show she doesn’t recognise, and the account is @TheDailyFeminist. Seems as good a place to start as any.

She starts reading through the posts.

And it’s not just quotes and sayings, there are news articles and campaigns and shit that people has said that other people are challenging. She reads about pro-choice and laws of consent and the rights of men and women all over the world. There are photos. She recognises some of the people in them – Beyonce, Emma Watson, Nikki Minaj – and this makes her look more. She learns new names, like Kathleen Hanna and Audre Lorde and Malala and Maya Angelou and Emmeline Pankhurst. She comes across the term “suffragette” and googles it, and it brings up more articles, more images. She goes through the ages and looks at pictures and reads headlines and it catapults her through everything that every woman has had to go through at some point in their lives.

And Sophie realises that it’s not just women. NOT JUST WOMEN. Feminism is for everyone, feminism is fighting for the equality of everyone in a world where so many people are told that they are unequal. She learns about different sexualities and different genders by going onto Google – good old reliable Google – and looking up different definitions for different things, she learns about civil rights movements and the deep seated injustices that are ingrained into the foundations of every society, but it doesn’t worry her, because she can shake the foundations, even if she doesn’t know it yet there is this feeling inside somewhere between her heart and her lungs and she feels like it is on fire, but in a good way, she suddenly feel unstoppable even though she’s only just been made aware of the boundaries that could hold her back, she feels she can break them down, and she reads post after post after post until she realises that it’s been two hours and she needs to go the hell to bed, Jesus Sophie, it’s a school night.

Of course, this is just how I’m imagining it. I don’t know if she went and researched it, but I did. And at first all the videos and all the hate made me sad and angry and I went and listened to Bikini Kill on top volume for a while to get it out of my system. But then I found all of these inspirational quotes, and I thought – if that can make me feel this powerful, this alive, this engaged, then what could it do for Sophie?

I’d like to think that my two little brothers – aged twelve and thirteen – would have the same reaction upon looking at feminism. And I’m sure they will. But not yet. I have no idea what it is like to try and discover feminism as a male human, but if it’s anything like being a female human? Then it’s there already, waiting for them to work out how to wear it.

The fact that my sister has her entire life ahead of her excites and terrifies me. She hasn’t, to my knowledge, consciously experienced sexism yet. She is white and British, like me, and so will always hold some position of privilege, but she is a young woman. A young woman who has never felt less than her male counterparts. And maybe that only starts when you get to university, maybe it will come when she starts going out more. Maybe it will be a wolf-whistle from a passing car, or an inappropriate comment while she’s working her Saturday job, or a lad who won’t take no for an answer. And I know it will be scary. She’ll feel threatened. And although I would love to be, I won’t always be there to punch the person’s teeth in. Because my little sister means the world to me, and she needs to know that she should mean the world to herself as well. All sisters need to know that. All women. All men. Everyone should feel empowered, whether they’re sixteen, sixty, or anywhere in between. And if that empowerment starts with a few images on a social media site, then that is brilliant.

I want Sophie to know that she doesn’t have to do anything or be anything more than exactly what she wants to be. And I want her to know that that applies to everyone. And I want her to know that no matter what happens, she’ll still be my annoying little sister with a ridiculously Manc accent, and I love her, and she can’t change that. Not in my mind. I want to tell her. Be proud of the space you take up, of the decisions you make, of the voice you have, of the journeys you go on. Be proud.

Sophie’s doing pretty well. She’s getting her head down at college, planning which university she wants to go to, is doing work experience at a vet’s surgery, has been a vegetarian for the past year, and can beat her brothers in a kind-of-fair fight. She’s got an excellent sense of comic timing and has a proper Mancunian accent. She’s sixteen and a feminist. She just hasn’t said it out loud yet. 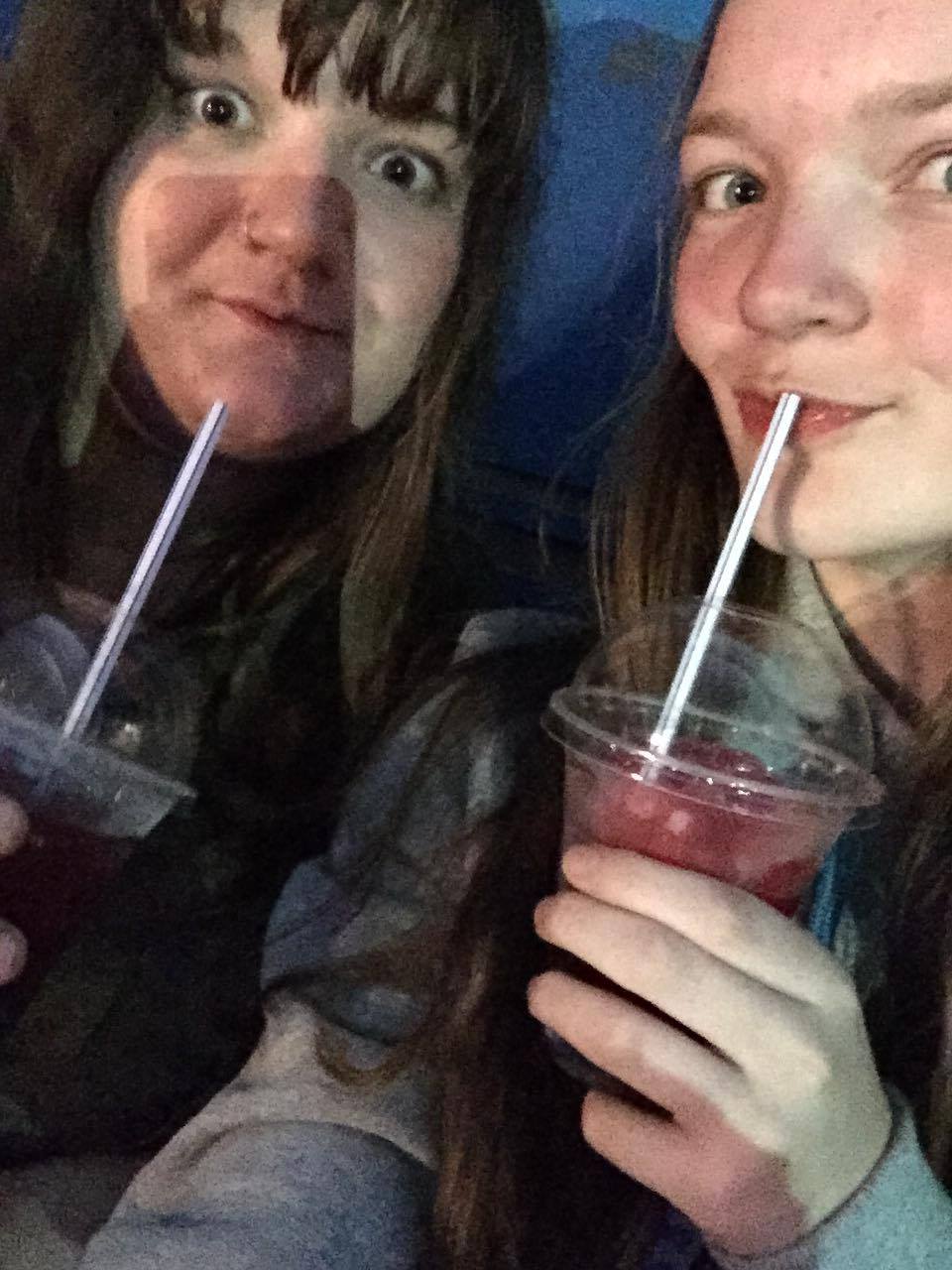