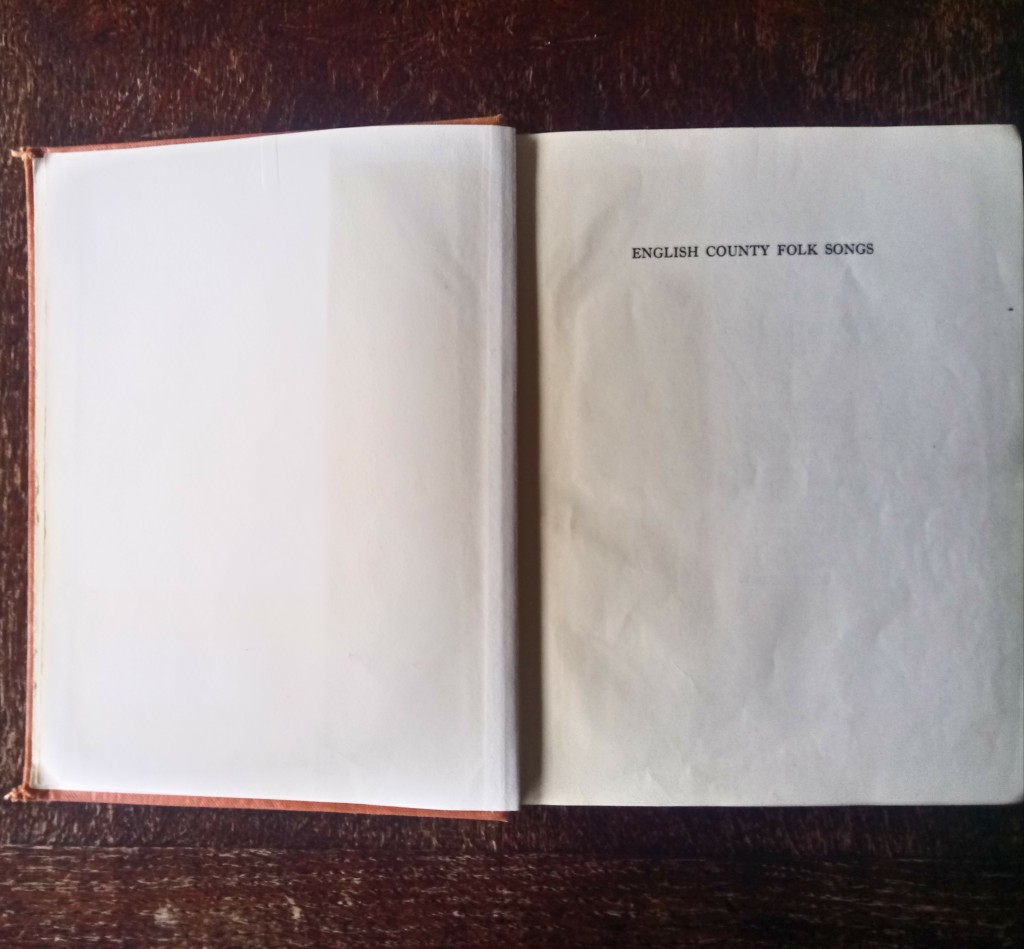 On Navigating a Legacy of Song, or ‘where is this voice coming from, and who am I when I can hear it?’

I hear your voice, but its source is hidden, and a subject for conjecture. Through time, through space, me here, you at some unknown distance, through veils of vibrating skin and neural passageways, you come to me and I receive you like a struck bell.

It was in 1903, whilst staying at the vicarage in Hambridge, Somerset, that Cecil Sharp famously overheard the gardener singing The Seeds of Love. A ballad, a sad love song, sung in the voice of a young woman who compares different flowers as allegories for different potential lovers. It was in a style that was once commonplace, but which for people of Sharp’s suburban background and classical musical training had become very unfamiliar. His overhearing was an epiphany.

Sharp believed he heard, through the song, through John England (the archetypally suitable name of the gardener) the vestiges of a forgotten culture of inestimable value. The chance encounter resulted in him spending the rest of his life searching out other such fragments of the conjectural whole that he imagined, and in his instigation of an influential programme of nationalist cultural education. I hear the gardener’s voice today – or a version of it at least – through description, through recordings, and through my imagination, and my situation is different. With no fragments left to find, and with no desire for an elaborate revival, I look instead for this vocal inheritance at the back of my throat, towards the deep stem of my brain, and seek to fall into an entrainment.

Your voice suggests what mine could sound like, in potential. It brings me back to a memory of myself in a state which I may never have experienced.

This is not an issue of vocal authenticity, particularly. Or rather, what authenticity means here is unexpected, resonant and dynamic. Songs of this broad, ungraspable type have been passing between oral tradition and printed edition for many hundreds of years. They may exist in many overlapping versions, migrating widely across the Anglophone world, and beyond. Each song bears the imprints of many, many singers, the grains of all their voices. Affinity may be felt towards particular points on this continuum, but to insist on the unique authority of any of these is unrealistic. Authority comes instead from the depth of engagement, or you might say, the extent to which you are willing to surrender. Thus this is a voice, a vocal sensibility, that might always be vital, and of the moment in which it is sung. Simultaneously, this is a voice that is always immemorially old. There is a long tradition here of the past being sung into the present. Today I may feel that my generation is unique is dealing with a lost or mythic tradition, but 100 years ago, village singers were often recorded singing about the Napoleonic wars, or the Queens of Henry VIII. It is a voice in which the relationship between the present and an unspecified past is intimate and enmeshed – as, fittingly, some of the most passionate of the love songs deal with an encounter between a lover and their missing beloved, whom they slowly realise is a ghost, returned one last time to say goodbye.

Sharp’s hearing of an expression of national identity in the songs seems less relevant to me, today. The cross-border complexity of the lines of their transmission that more recent scholars have traced negates this. So too, paradoxically, does the very localised variations in style and dialect delivery. Nevertheless, while the concept of being from somewhere has become increasingly problematic for this voice, and for ourselves within this society, a need for a meaningful grounding connection with the landscape within which one finds oneself has not gone away. I think of lines in an article written by the novelist Angela Carter about Fred Jordan, a singer from the Corve Dale in Shropshire whom she visited to interview in the 1970s. ‘On a frosty morning in winter, his voice rings across the fields like a great horn. You can hear him from far away’. I am haunted by this idea of the voice as soundscape, of a singer’s voice reflecting a particular experience of a place so as to connect people living in it with those long buried beneath it.

I have heard of a tradition from the west of Ireland, of the singer singing with their back to the listeners, facing the wall. I believe this was done for acoustical reasons, the voice being projected to resonate against the hard surface of the wall. But as a visual image it is striking. I have not heard of the practice within Britain, but one analogous feature, perhaps, heard in the old recordings of village singers here is their understatement – an austere, almost depersonalised quality in which the details of the song, its narrative high points, are left to express themselves rather than being acted out through vocal modulation. I find this very affecting. The singer realises an expressive intensity by operating within the strictures of tradition, through restraint, and the collective bearing of an anonymous lineage of voices.

Where these songs are known today, it is largely through the activity of professional performing musicians, who almost always present them arranged and accompanied, on a stage, and with amplification. The older habit of singing solo, in informal, domestic settings, where the boundary between the singer and listener is less, and where there is the possibility for a different sort of musical exchange to that which we are accustomed today – a particular coming together of song, place and people – is a rare scenario, and one difficult to deliberately set up. In its absence, I would like to believe that the time honoured practice of singing alone, with no one to hear has value. The Norfolk singer Walter Pardon remembered his songs in solitude long after they had fallen out of use and favour in his immediate community. His huge repertoire, learnt mostly within his own family, would have been lost forever were it not for a relative of his passing a recording of his singing to the revivalist singer Peter Bellamy in the early 1970’s. By 1976 he was performing at the Smithsonian Institute.

I sometimes wonder whether my being so emotionally involved in a disregarded, or private tradition is an escape into a solitary world that cannot be challenged, because its exists primarily in my own mind. Any external interrogation of my approach can be avoided, by my hiding, conceptually, in different facets of it, as an inviolable retreat. But this approach, whilst sometimes silent, is not negative. Even whilst introspective, it is generative. Longing, listening, belonging, becoming – it is not a thing of silence, but rather of waiting for the right moments.

Where is this voice coming from and who am I when I can hear it?

Phil Owen is a singer and writer from North Somerset. His work is informed by an interest in the relationship between voice, heritage, and place. With Megan Wakefield he ran Tertulia, an experimental literary salon.