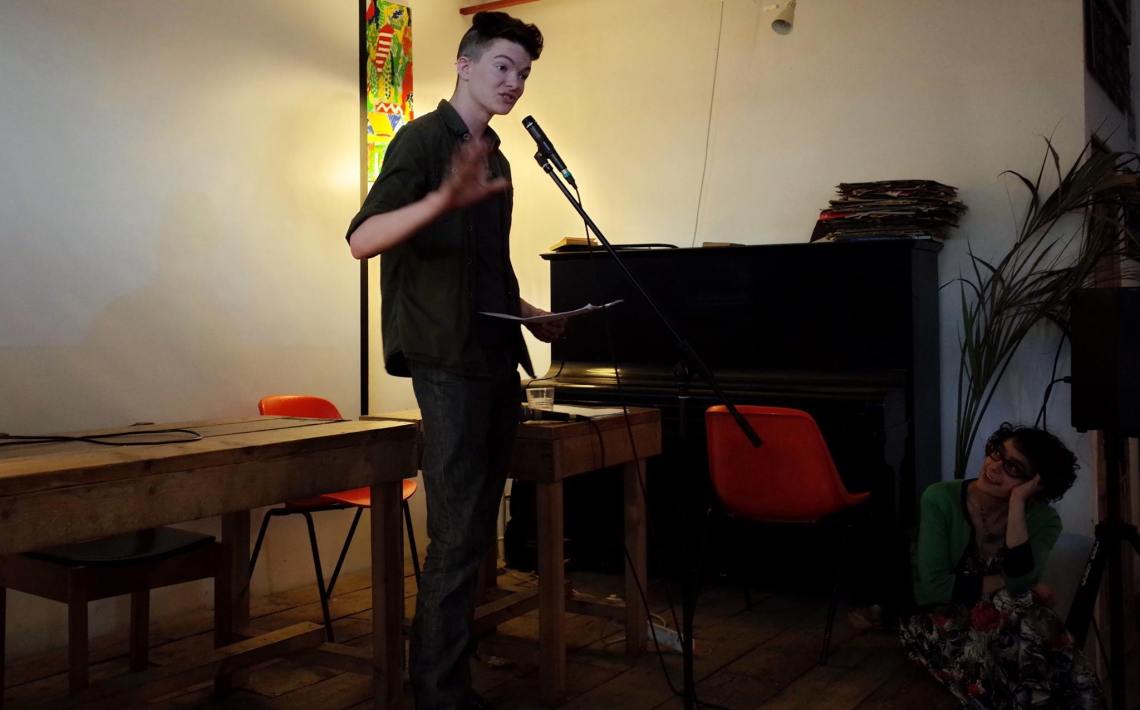 On Saturday, June 27 this year, I forgot it was pride until 5 PM

But I still did the sort of thing that the good queer, trans, punk-ish boys my age are supposed to do on those sorts of days. Three things:
[1.] I woke up late. Like, 2 PM.

[2.] I took out my clippers, which I haven’t used in two years, and I did a messier version of this [point to head].

[3.] I went to the planetarium with a boy and sat on the hill in Greenwich, distinctively away from pride,and then went home with him.

And, on the way home, we passed kids in t-shirts reading “Some people are gay, get over it”

I sat in the back row of the DLR and scoffed at them.

Then, days later, I felt a little bad about that, because I’ve never actually been to pride – that’s physically closest I’ve ever been to a pride parade by far.

So, I went on Twitter, and I began to sift through #prideinlondon. Here’s what I found:

[Image of four young gay men, each carrying a sign reading, “Some gays are UKIP/Get over it”]

There is coffin to represent fact that #PrideinLondon is now a company, literally, not demonstration of identity

[image: Pride – Whose side are we on? LGBTQI…| Commercialisation]

15 year old son exploring his gender identity. What better place to bring him than @LondonLGBTPride – London should be proud

The View From the Shard

Fuck you. [Looks to side] Sorry, babe. Not you. I’m just on Twitter.

The march is over – we took back Pride as our protest! #Pride #PrideLDNParade #pride2015 #PrideinLondon #reclaimPride

“R.I.P. Pride Funeral breaks into protest and leads the London LGBT Pride march ahead of Barclays and chases UKIP off Pride.

“A coalition of individuals belonging to LGBTQI communities and holding a ‘Pride Funeral’ procession, broke through barriers at Oxford Circus to lead this year’s London LGBT Pride Parade. Coffin bearers, flag wavers, banner holders, an undertaker and a samba band sounding a slow funereal beat, all resisted security and stewards who attempted to physically remove them from the street. With flags baring messages of solidarity, politics, freedom and anti-commercialisation, RIP Pride activists solemnly strode the route section from Oxford Circus toward Embankment, until its final destination at the foot of Whitehall. The group’s action was one of sombre defiance against the fee that Pride organisers now charge those who want a place on the historically significant LGBT parade.

“Dan Laverick a mourner at ‘RIP Pride’ said: “We’re here to remember what Pride started as, and its radical legacy. We’re also here to protest against what it has become. I’m here to grieve over the soulless corporate character of ‘Pride in London’, which has nothing to say about LGBTQI issues today such as 1 in 4 homeless people in the UK being from our community, the people seeing services upon which they depend cut as part of the austerity agenda (3), or the loss of queer spaces in London to property developers serving an international elite (4). To invite a party like UKIP which attacks migrants, people living with HIV, homosexuals, and any other vulnerable minority as it suits them, was the final nail in the coffin (5).”

“Dan Glass a mourner at ‘RIP Pride’ said: “It was so great to see Pride return to it’s roots as a protest rather than just a parade (6). Pride should have strong political principles with equality for everyone at it’s heart not just big business or any organisation who wishes to milk the LGBTQI community dry. Our demand is that the organisation of Pride becomes democratic: decision-making power should be taken away from the current unrepresentative, largely corporate Board and an LGBTQIA assembly should be established, to decide the theme and direction for Pride in 2016 and onwards.

First read at Reading the Internet: Something Other