I enter the rink by a side door, and am immediately stopped by an attendant, instructed not to stray from the designated paths and “not to make contact with the bees.” He points out the two hives, sprouting up from the clay floor to almost two metres in height, seeming more like ominous termite mounds to me. I follow what would have been the edge of the ice-rink around the excavated floor, and then out across a strategically positioned viewing platform at one end of the spectacle. I am now given the opportunity to survey the scene in full. I can’t help but picture rows of spectators who would have filled the benches lining the sides of the ice-rink just last year, light streaming in from above to illuminate the action below. But now the concrete floor has been sliced open and the underlying foundations dug up to create clay paths along which viewers can navigate the ecosystem constructed by the artist Pierre Huyghe. Interspersed along these routes are stagnant pools of water, which glisten with a kind of radioactive sheen. The green algae blooming on the surface of some provide the brightest colours.

As I look out over this world, my attention is once more drawn towards the two hives at either end of the ice rink, buzzing with busy activity as the insects come and go. It is only on closer inspection of my photographs after the event, that I realise these are not the beloved honeybee. They appear more wasp-like, less fluffy and bright, and a bit more sinister. These less famous bees, a species I do not know, a species I hadn’t considered existed in my anthropocentric thinking that honeybees are the only type, apparently do not manufacture honey. Honeybees are but one type of a species of more than 200, all with their own role to play in our ecological community. I wonder as I watch the teeming life of “the Hive” what the purpose of their colony might be in this barren landscape. Fascinated by what National Geographic journalist Peter Millar calls their “swarm intelligence” and “decentralised coordination”, the bees’ methods of social organisation provide ecological models from which we might learn. He writes how the study of “swarm intelligence” indicates “almost any group that follows the bees’ rules will make itself smarter.” Critical theorist Jason Wallin uses “swarm ontology” to explain how all life is constituted by “microbial and amoebic intelligences that are not our own.” In his chapter ‘Dark Pedagogy’, included in Patricia MacCormack’s 2014 publication, The Animal Catalyst, Wallin suggests that if humans were to adopt such a collective method of thinking, this would create “a queer symbiosis of human/inhuman assemblages suggesting a turning from the transcendent towards the material connection of life forces and their potential to constitute an ecosophical ethics that begins by displacing the anthropocentric conceit of a ‘unified’ and ‘uncontaminated’ world-for-us.”

We are currently witnessing an alarming rate of unexplained colony collapse across our bee populations. Yet these have not yet served as drastic enough warning that the chemicals we pump into, and subsequent strain we enforce onto, our world are destroying life forms upon whom we are dependent for our own survival. An absence of the crucial cross-pollination bees and many other insects perform would result in drastic food shortages worldwide. In addition to us being dependent upon bees and their propagating functions, the amorphous materiality of the swarming hive, a one that is a many of ones, presents an alternative social model to the one I know: Western capitalism, a pseudo-democratic system overshadowed by the inhuman effects of neoliberal forces.

Within the hive, with the exception of the Queen, all the bees work together to harvest pollen and produce wax for their own greater good. The bees, with their swarm mentality, decentralised coordination and matriarchy, present a structural alternative to our capitalist, patriarchal (verging on oligarchal) institution. They morph into Timothy Morton’s “dark ecology.” This takes the formation of a “mesh” made up of “strange strangers”, a structure where lives can be spectral, both themselves and not at the same time. For Morton, all species are always dependent and depended upon by others (both within their own bodies and in the larger environment). A sprawling network without centre or edge, Morton presents ecological awareness as uncanny and indigestible. For Wallin, the bees are an example of a possible ecosophical ethics that embraces all manner of ecologies, remaining faithfully attendant to the larger whole. A heterogeneous mass of beings, all related yet independent in their own rights, the bees within After Alife Ahead hint at the human need to recognise itself as part of a much larger system, accepting its prostheses, its others, both biotic and abiotic, as mutual relations: all part of an interdependent network.

The very otherness of the bees, their total difference from myself in their movements and appearance fascinate and attract my gaze, whilst simultaneously making me quiver in fear of their sting. But I feel an underlying sadism. I know they will suffer more than me, because they face death in their single opportunity to penetrate another. Like the gluttonous children’s character Winnie the Pooh, in endless search of his honey fix, we suffer their sting to satisfy our interminable sweet tooth. We go so far as to try to translate the hums, and buzzings, and wagglings of their unique and sophisticated modes of communication in our interminable hunger. Causing irreversible destruction to the functioning of the bees en-route, humans forever remain in the dark, controlled by, not controlling bees’ capacity to produce.

Perceived through the lens of their difference to us, insects question the rigid categories we impose to mark ourselves out as specifically human, as well as how we differentiate between human identities. Bees in particular, with their matriarchal, totalitarian societies both fascinate and terrify human curiosity, but maybe we can learn something from how they organise their hives. Laline Paull’s 2014 novel The Bees dramatizes what life might be like inside the world of the hive. Her vision paints an eerie picture of competition and hierarchy. Even under a tyrannical Queen, the importance of, and reliance upon, male bees, remains significant, and the Queen’s violent rule incites fear in her readers. Although the story of the rebellious worker bee, Flora 717, ends triumphantly, her illegal offspring taking control of the hive, this story does not explore an alternative society for people to emulate. Instead, Paull presents a chillingly human encounter with the unknown. Her book illustrates how it is impossible for us to imagine what life is like for these creatures, being completely limited to our own perceptions, experiences and understanding of the relationships and the world around us. And it is for this very reason that they will always go on to terrify and fascinate us.

The Ancient Greeks referred to bees as the Birds (souls) of the Muses, and it was believed that if they touched an infant’s lips he would be granted the gift of song, exceptional eloquence, or even of prophecy. This was said to have happened to Plato, Sophocles, Virgil and others, thus bestowing on them their philosophical wisdom. In the Egyptian hieroglyphic language, the bee was the symbol of royal nomenclature, a reflection of hierarchical organization as well as of industry, creative activity and wealth. These ancient perspectives suggest that humans may not lie at the centre of the universe. Perhaps we are in fact in debt to the bees for our cognitive skills – the very ones we use to distinguish ourselves from all other species? 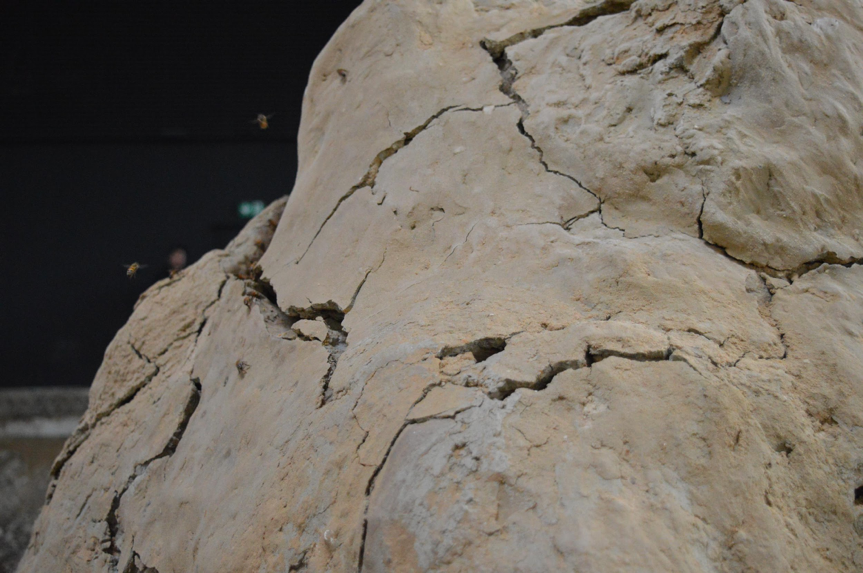 I am filled with further intrigue as the bees vanish through the cracks of their large clay structures, burrowing secretly into a holey space – a space that I cannot access. I cannot get too close for fear of their sting and also recollect the warning words when entering the ice-rink: “do not make contact with the bees.” They and their habitat remain impenetrable.  The organisation and powers of production of these creatures remains a mystery over which I can only look on as observer and outsider, never to become privy. Jason Wallin describes how the “burrow punctuates the territory, forcing it into secret nuptials with unregistered forces suggest[ing] that astride the official enunciations of the institution might subtend all manner of unthought connections of the institutions through which different ecologies or cartographic diagrams of the world might be forged.” This is exactly how Huyghe’s bees appear to me. In his 2015 book Dark Ecology, Timothy Morton reminds me that we can never be certain about whom or what we encounter but nothing is irrelevant. He emphasises how all life is made up of, and dependent upon other life, thus positing our planetary environment as one giant, ecological system, or assemblage, in which all constituents are crucial to its function, regardless of whether we understand, or identify with each other or not. The alluring mystery of the bees, whom I follow with my gaze until they disappear into their own world, become my own strange strangers with whom I know I am connected but will never be able to fully understand. Both Morton and Wallin urge their readers to notice what is absorbed into traditional anthropocentric thinking, and to open up “from within and beneath on behalf of searching out new ethical relations to life that do not reflect the image of the human, but its hallucinatory undoing for the purpose of defraying the speciesist, colonial and narcissistic practices that are the legacy of anthropocentrism.”

The two thinkers hint at the destructive capacities of human differentiation and dualism, perhaps originating in the specious separation of species on the grounds of capacity for rationality and language. Instead of ignoring or destroying anything we cannot understand, might we take heed from other non-hierarchical species burrowing underground? We need to come down from our pedestals to seek new knowledges and ethics that can accommodate all life, the creepiest and the crawliest. What Huyghe’s ecosystem brings attention to is how we are implicated in the material ecologies of this planet, not superior to and not outside of them. Even if we are unable to penetrate the mysterious depths of other species and their processes, the very layout of Huyghe’s world forces us to walk down from the viewing platform to encounter the subterranean worlds below, and consider our relationship to them in this microcosmic space. Despite our physical isolation from the swarming, burrowing world of these bees, being placed in proximity to their activity in this barren landscape, I begin to consider our very real dependence on them.  I am transported to a dystopian time ahead when there might be no fauna left for them to pollinate, a dark picture with repercussions for both me and them, thus immediately implicating me in the damage taking place.  Within Huyghe’s ecosystem, the risk of disappearing life somehow feels more pronounced, and these two solitary hives, bleak in the absence of honey and fauna, suggest troubled times to come. 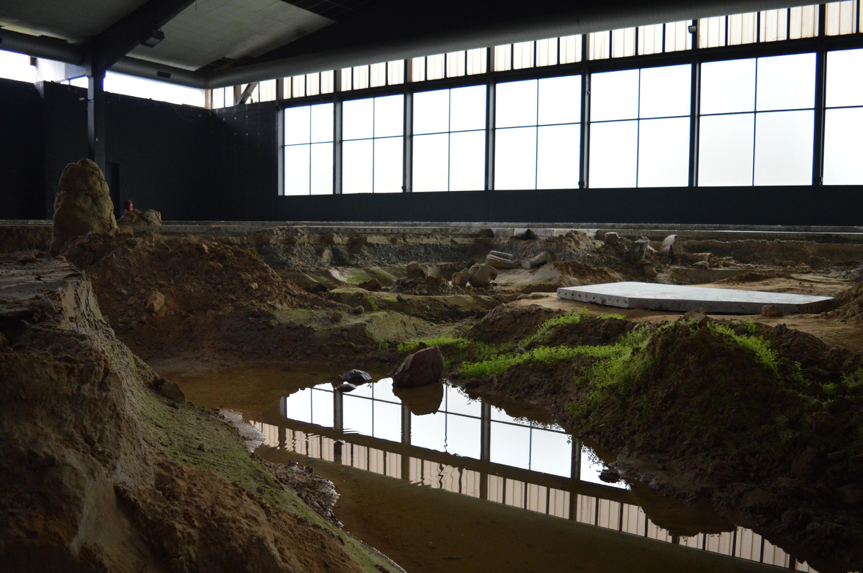 This is an extract taken from a larger piece of writing about French artist Pierre Huyghe’s (b. 1964) recent installation at Münster Skulptur Projekte (Jun.-Oct. 2017)

Elizabeth Atkinson is an AHRC TECHNE funded Critical Writing PhD candidate at the RCA. Her research looks at nonhumans and their processes in contemporary art, and how humans might learn from their example in relating to one another and our shared environment. She lives and works in London.