The institution: it enables, it makes visible, it obscures, it contains, it constrains. It summons into being a public sphere, whose borders it works to maintain. Its violences are procedural and impersonal; its spaces are built to function (but are never un-aesthetic). Institutional critique – artwork that uses the structures and forms of institutions to reveal the dynamics of power that support them (see the work of Andrea Fraser or Hans Haacke) – is often embraced by the institution itself, a sign of its flexibility, its capacity to absorb and defuse. 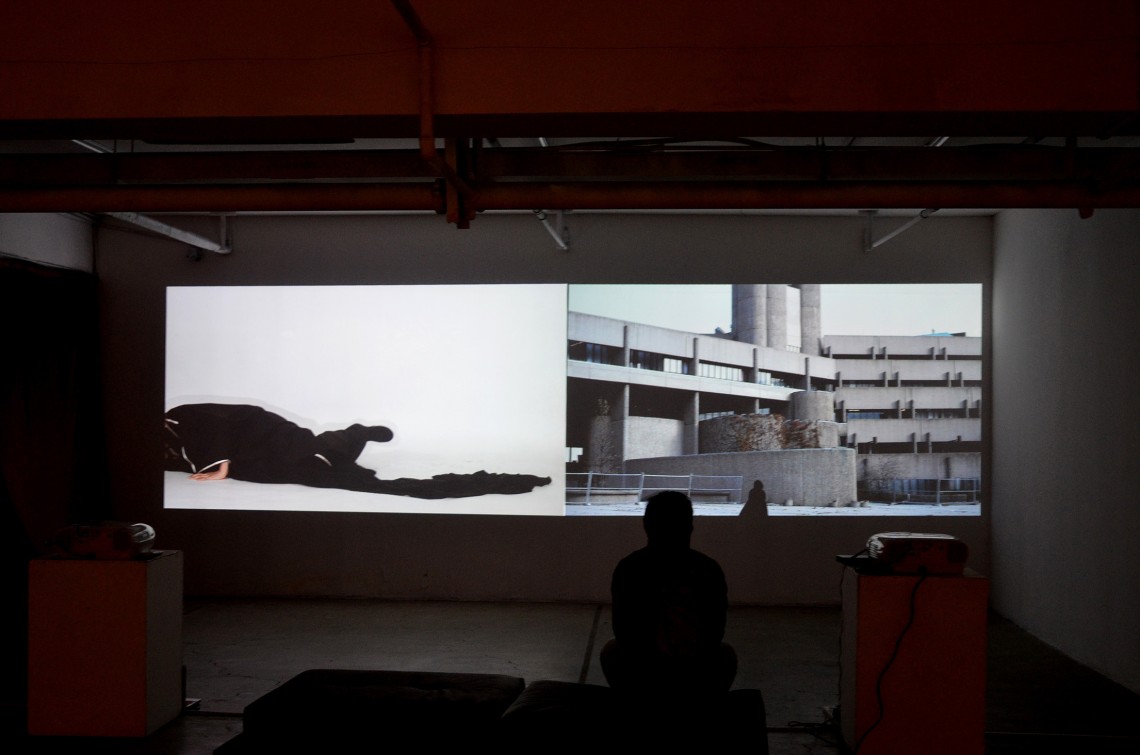 The three-part series License by Tamara Al-Mashouk, is keenly attuned to the power of institutions. Born in Saudi Arabia, and having lived in Bahrain and Boston (USA), Al-Mashouk pays particular attention to the operation of this power on women’s bodies, on queer bodies, on bodies which cross borders. The series takes the form of video, installation and live performance, in a sense itself migrating between spaces and media. As a kind of anchor (though an ambivalent one), throughout the series, modernist architecture stands in for the institution as such. License I, a two-channel video installation, shows Al-Mashouk climbing and cavorting over brutalist, concrete government buildings. In the second channel, Al-Mashouk is pushed, over and over, and gets up. She specifically connects these simple actions to the dramatic shifts in the position of women in Saudi Arabia, in terms of voting and education, and continued restrictions on access to public life. Indeed, the simplicity of the actions underlines the physicality of state power as well as the dimension of endurance in resistance.

In the second iteration of the series, License II, the concrete buildings have transformed into a sculptural distillation of the core elements of the modernist architectural style. White wooden beams approximate and recall masterpieces like Mies van der Rohe’s Farnsworth House, and the utopian dreams of masterplans and grand narratives this mode of design evokes. The structure acts as a kind of pavilion for performance, and this live intervention inserts the bodies of queer people, people of colour, precarious migrants, into the literally white space of European and North American institutional politics. Here again, the physical, the embodied, movement – all of these set up a tension with the building-as-institution, showing how both power and resistance are played out by bodies in space.

The final iteration, License III, re-purposes this pavilion in a video work which shows Al-Mashouk at first seemingly trapped in the structure, her head enclosed in another white box, a kind of cage within a cage – though also, perhaps a visual identification of the body with the building. From here, the video shifts to show the artist with a flaming torch in hand, slowly and deliberately setting the structure on fire – the movements of the camera matching the deliberation of the body. (Indeed, throughout the series, the visual language is smooth and purposeful, creating a kind of dissonance with the forms of violence which appear). A voiceover accompanies the conflagration, first in English, then in Arabic. The subject position of this voice is ambiguous – it might be the voice of the woman seizing agency in an act of destruction, but there is also a hint that the building itself might be speaking. In Arabic, the voice asks, ‘How are you supposed to know anyone? With all their history, background and context. How are you supposed to speak without describing? And how do you describe without explanation? How do you say “I” without “I was” and “I did”?’ The implication here is that freedom can’t be conceived in isolation from the conditions which produce us, from the institutions and procedures and spaces that make us what we are. This returns the work to the question of institutional critique and its ambivalent relationship with the institutions which both make the work possible, and which the work resists. License seems to locate its own investigation precisely in this ambivalence, in the interplay between a woman both identifying with a structure, and setting the whole thing alight.

The title of the series, License, recalls specific bureaucratic modes of control – issuing or denying a driver’s license, and the associated freedoms that are or are not granted. It also suggests a broader mode of permissibility, and asks how we might rethink what kind of license we take, and what it takes to allow ourselves to intervene in the institutions which surround us.